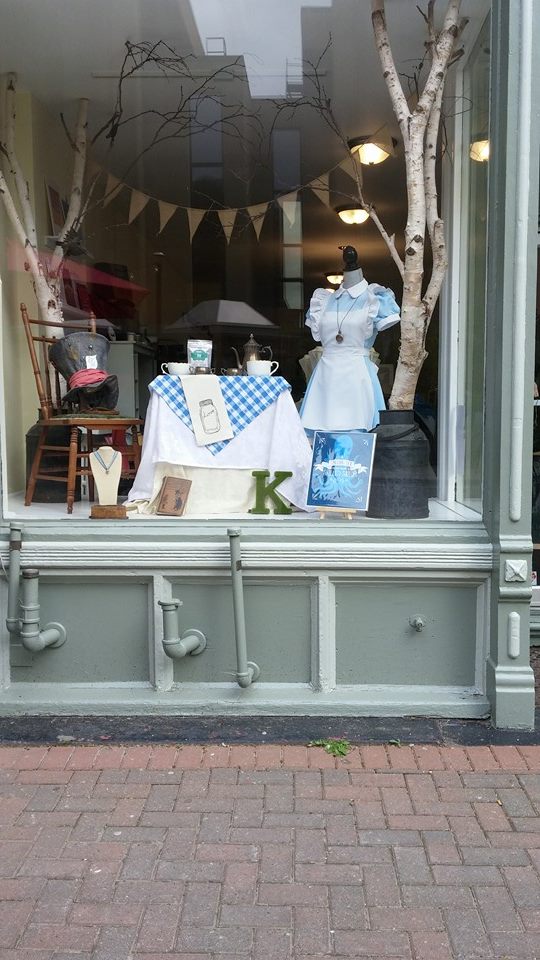 Kuriosities is located on the picturesque and historic Victoria Row in the heart of downtown Charlottetown.

`Curiouser and curiouser!' cried Alice (she was so much surprised, that for the moment she quite forgot how to speak good English)

Would you believe me if I told you that it all started with a story - a tall tale of bandits and train robbers, a reckless cowgirl, the friendship of crows, an enchanted birch grove, footsteps through the snow, a lighthouse, and a mystery?

These are the seeds from which Kuriosities germinated, and the stories that echo in our work and whisper between the walls of our studio shop.

Storytelling is our passion...and it is at the heart of all that we do.

Drop by our studio shop and you will hear the sounds of our workshop in the background, as Kimberly (our resident goldsmith and designer) brings your jewelry to life. The muffled hammer strike, whir of drills, and the melodoic churning of tumblers polishing our jewelry to a glossy sheen, can be heard under the soft strains of vintage blues playing in the shop. You may even catch John or Kimberly sawing out our famous Island necklaces by hand just behind the counter.

Each Kuriosities piece is made from raw materials start to finish, right on the premises. We would be more than happy to tell you the story of how each piece is crafted using age old jewelry techniques - so don't be shy to ask questions! We love what we do, and love to share.

Kimberly McIntyre's passion for the creative started as a small child. As a young girl she was mesmerized by gemstones, and all things earthy and whimsical. She would lock herself in her room for hours in daydream -sketching, painting, reading and spinning stories. This passion has followed her throughout her life, leading her to complete an honors degree from Concordia University in Creative Writing and English Literature.

Kimberly had always wanted to be a writer and an artist when she grew up, but was told by everyone she knew that that was all fine and good, but not very sensible. She chose to not be sensible, and now works full time as a jewelry artist and poet living on the East Coast of Canada, in a moss green farmhouse at the edge of the sea.

As a jewelry artist, Kimberly's education follows her approach to life - to follow the winds of inspiration and adventure to where the best stories lie. She travels across the continent on a regular basis to study under master jewellers who are the top of their field in the next skill set she needs to make her creations come to life. She strives for excellence in the execution of her craft, while expressing her creative vision.

Kimberly's pieces are worn by over 75 thousand clients around the globe. She has designed pieces for organisations such as Humane Society of the United States to represent their Kindred Spirits national fund raising program, and for the graduating class of the University of California's School of Midwifery. Most recently Kuriosities' famous Island necklaces were purchased by the government of Prince Edward Island and represented the province on trade missions to India.

Kimberly's work has appeared in magazines, and graced the wrists and necks of celebrities. Jack White (formerly of the White Stripes), Brendan Benson, and Patrick Keeler wore Kimberly's work on a world tour for the Raconteurs.